« Are Only One of You Involved in the Finances? ... If So, Time To Make A Change! | Main | Parents Should Discuss Aging Issues With Their Adult Children » 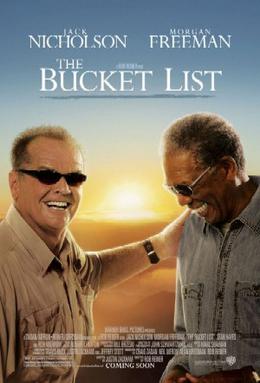 Even though it is an unlikely source of planning for retirement, the movie industry often leads to the thought process about the later years of life, according to USA Today in “Hollywood can inspire you to save more in your 401(k) for retirement.”

If you remember Jack Colton, the male lead in 1984’s “Romancing the Stone,” then you know about a guy who spent his whole life dreaming of owning a sailboat, even while he was hiding from a foreign army and getting involved in a crazy criminal treasure hunt. Retirement savers need to find their own inner dream, one they cannot be distracted from and that will keep them focused on saving and investment, no matter what. Imagine your future self-doing what you love doing.

Then there is “The Bucket List,” with Carter and Edward, who are ready to have an adventure, when their diagnoses are terminal. If you have got some thoughts about a bucket list floating around, make them real. Write them down. Then put them in order of priority. Visualize what you will need to do to get there. Building your connection with your dreams will keep you motivated.

An example of keeping your eyes on the prize comes from Netflix, with “Fuller House.” This is a great example of how mapping goals can clinch a retirement strategy. Sitcom dad Danny Tanner gives his San Francisco home to his daughter. He is not retiring, but he planned for years to live where he wanted, while giving his daughter and her family his home. Know where you want to live in retirement and keep that in sharp focus.

“Everybody Loves Raymond” features Ray and his family and his parents. They live close together, so much so that they are involved in every detail of each other’s lives. Or, for a completely different lifestyle, remember the 2012 comedy “Quartet,” directed by Dustin Hoffman? This was about a retirement community for stage performers who sought to create a new community among their fellow actors.

Figuring out who you want to spend your retirement years with can have a major impact on where you will live. Do you want to be close by your family, involved with their daily lives, available for babysitting, family dinners, and the grandchildren’s soccer games? Or would you rather pursue your own interests and enjoy a warm climate?